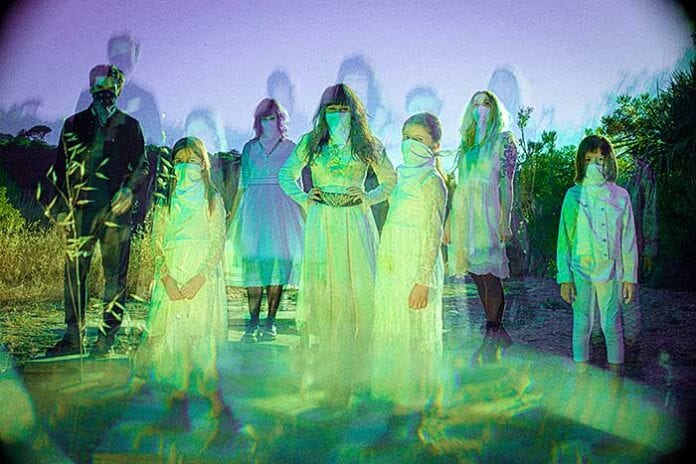 “Under the Spell of Joy is a space-gospel record. We believe we served as channels for what we think are guides. As we learn what the songs are about we realize they are meant to be sang like chants, hymns, or spells. Most of the songs were recorded with 12 voices, including a kids choir! We are learning that words with intention and energy hold so much power, especially when said or sang with a group. “The Universe” is a song to sing, a space to be, a time to think, remember, and truly feel that not only are we all connected, but we are also being guided.” – Bonnie Bloomgarden of Death Valley Girls

The album title Under the Spell of Joy comes from the text on a t-shirt from San Diego heavy psych rockers Joy that was handed off to Death Valley Girls’ vocalist/guitarist Bonnie Bloomgarden, who wore the shirt for five years straight, treating it like a talisman. “I read it as being about manifesting your biggest dreams and responding thoughtfully and mindfully to everything that comes in your path with joy and compassion first,” Bloomgarden explains. “There is a lot to be really angry about in the world but joy is just as powerful if used correctly!” The band sought to create a spiritual record—what Bloomgarden describes as a “space gospel”—with the intention of bringing people together and creating the kind of participatory musical experience people have in places of worship. It’s a record loaded with chants, choirs, and rousing choruses, all for the purpose of encouraging people to sing along. Where the band had once sought to connect people through more esoteric means, they now tap into the age-old tradition of uniting people by inviting them to be an active part of the music.