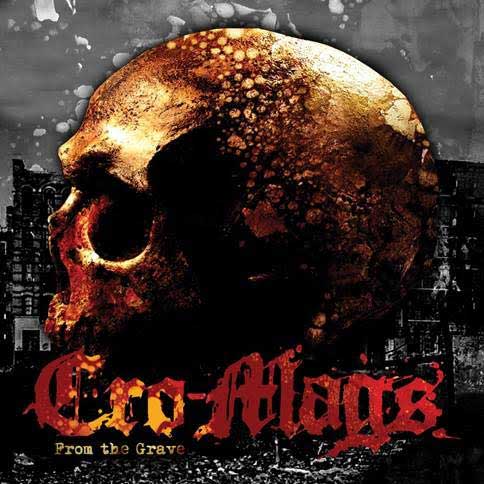 2019 was a roller coaster year for CRO-MAGS founder, bassist and vocalist Harley Flanagan. From regaining sole ownership of the band name he created, to playing with his childhood friends in the re-united Misfits, CRO-MAGS took their punk-fueled legacy across the US and Europe, released their first music video in 27 years, and put out their first music in nearly 20 years via two EPs – Don’t Give In (released in June) and From The Grave (available today). The three song EP is available on limited 7 inch editions of clear w/ black smoke, solid yellow, clear orange and glow in the dark vinyl. Flanagan gives a track by track breakdown below.

“From The Grave” – The title track features former Motorhead slinger Phil Campbell on lead and slide guitar, as Flanagan comments, “I first met Phil when we toured with Motorhead on the Orgasmatron tour. He is one of my favorite guitarists of all time and I still can’t believe I have him playing on one of my songs!” Campbell adds, “We hung out a lot during the tour in the eighties. When I heard the track he wanted me to do, I just had to do it.”

“PTSD” – “Basically the song is about just that, Post-Traumatic Stress Disorder, something that I have dealt with in my life, and during the time of the recording I was dealing with it a lot. The fact is I didn’t know I had PTSD until my friend and Navy Seal Jocko Willink told me without a doubt I had PTSD. I thought it related only to combat veterans but that is not the case at all, and this song is metaphoric for the battles and struggles faced in life. It was therapeutic to get some of it out on paper, and it also caused me to reach out to people that are able to help me – real life, real life stories, real emotion, real soul searching.”

“Between Wars (Instrumental)” – “This is an instrumental track I wrote for the forthcoming film Between Wars that I have a role in alongside Michael Imperioli (Sopranos, Goodfellas). Every single day I walk around New York City, on the streets and in the subway, where I see all these street musicians and hear all their sounds and I asked myself how do I bring these elements into my record – how do I take the listener into my life, into the city that I grew up in, into this experience? And every day at Penn Station I would pass a cellist, this guy with braids and tattoos on his face, sometimes playing with his kid who is playing violin. The emotional tone he brought out of the cello really struck me and at a certain point, after tracking a particular piece of music, it hit me – this cello was the perfect sound to be in this piece of music.

So I approached Carlos ‘Lamont’ Cooper, a former gang member who did time and has been shot multiple times, asking him to play on the record. He reads music and is classically trained, having learned how to play in public school (when there were music programs!), and plays on a much more elevated level than most I have known in metal or hardcore.” With Flanagan, the CRO-MAGS are rounded out with guitarists Rocky George (Suicidal Tendencies, Fishbone), Gabby Abularach, and drummer Garry “G-Man” Sullivan and their full length album is set for release in early 2020, their first since the album Revenge (2000).

FIT FOR AN AUTOPSY Drops “In Shadows” Video