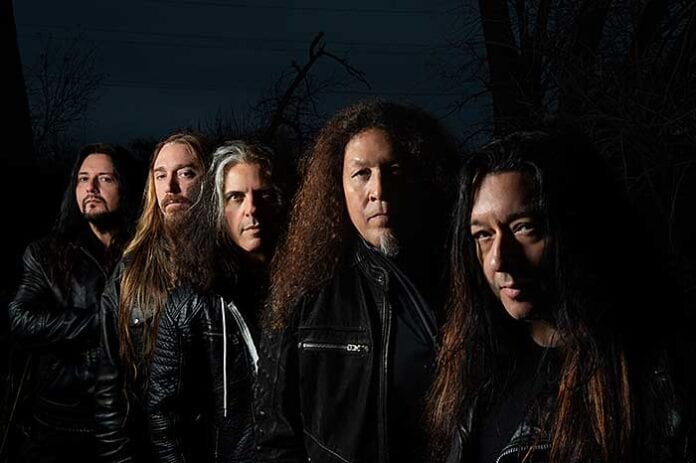 It’s a great time to be a Testament fan. The band is arguably creating some of the most original and dynamic music of its career, taking aim at their classic material from the 1980s with a fresh ear and the willingness to go all in with modern technology. It hasn’t been an easy road, however, as break ups, roadblocks, and personal tragedies have all stood in Testament’s way. Yet, they’ve hurdled each obstacle and come out the other side a stronger unit. Now, it’s time for Titans of Creation, an absolute ripper in the classic Testament style, while at the same time exploring further guitarist Eric Peterson’s penchant for melodic black and death metal. We caught up with frontman Chuck Billy—weeks out from a European tour where he and his wife were diagnosed with COVID-19—to talk music, history, and recovery.

With the last couple of albums, Brotherhood of the Snake and Formation of Damnation, do you feel that you’ve entered a new life cycle for Testament, given all of the creativity that’s been swirling around?
Definitely. I’d say that we set the bar with The Gathering and then after I got ill and we got back and had the full original lineup for a time when Alex [Skolnick, guitar] rejoined. We started playing in 2005 together, and we did lose a couple of guys along the way, but once Formation hit, I’d consider it a new resurrection for the band. We’ve just been moving forward, and it really was having Alex and the guys back in the band that helped it happen. At times, I honestly thought that we’d never be band again. I’d look in the mirror and not even recognize the guy staring back. I thought my Testament career was done. So, having a second chance set us more at ease and made us more confident. Getting the guys back together enabled us to finish something we started. It was a weird shift in what we were doing and how we were going about things. Plus, we decided to do it full-time as a touring band, not just weekend warriors.

“I’D LOOK IN THE MIRROR AND NOT EVEN RECOGNIZE THE GUY STARING BACK. I THOUGHT MY TESTAMENT CAREER WAS DONE.”

In doing that, do you feel like you’ve transcended a generational appeal? There are probably kids who are Testament fans now that might not have been alive during your first 80s heyday.
(laughs) Yeah, I hear ya! I definitely see it. There are a lot of generations who grew up with us who are passing it down. We see a lot of that, and I do see fans getting younger and younger sometimes! I see small little kids on their dad’s shoulders, which is a huge difference from the shows in the 80s. Those were almost all young guys with not even any girls at the gigs! (laughs)

A lot of older thrash bands tended to move in a certain direction in the late 90s when metal was persona non grata. Testament moved in the opposite direction, getting heavier on an album like Low or full death metal with Demonic. Do you think that helped keep you guys afloat while other bands fell by the wayside?
Well, you gotta understand what we went through, doing the first five records every year in a row. At that point, we were on Atlantic, and that was a big machine with A&R guys telling us to give them singles, so they could push and promote it. That was where it all started, and once we finished with that, we were in a pissed off place after Low, with the band breaking up after the last record for Atlantic. Going into Demonic we were pissed off at everything, because times weren’t good for metal, and that record came out demonic, as the way we were feeling. I got some resistance from people who thought we shouldn’t do that, while at the same time there were others who loved it. I found that I’m most comfortable trying to mix it up. I think we found that balance with The Gathering, and I found the best of both worlds.

Those black and death metal influences are blended better on Titans of Creation, such as with “Curse of Osiris.” It’s there, but it still sounds like Testament. How has it been filtering Eric’s influences from these worlds into the band’s sound?
(laughs) Well, it’s totally Eric! He loves that stuff, and, of course, we couldn’t do a whole song like that, because it’s not my style of singing, but it does work when there’s a section or chorus where we can pull that off and have Eric contribute. This is the first time on this record where he’s stepped out and we put him on lead vocals. He did a great job in Europe when we did The Bay Strikes Back tour and he was singing “Night of the Witch” every night.

“WE NEVER WRITE AS WE GO. WHEN IT’S TIME TO WRITE, IT’S TIME”

How soon after the last record did ideas for Titans of Creation begin to percolate?
It took a while, actually. We never write as we go. When it’s time to write, it’s time, and that’s what we’re doing. For Titans, we were coming off the Slayer farewell tour. The Brotherhood album was a pain in the ass to write, it took us a couple of years. It was brutal to get done. This one had nine months set-aside after the Slayer tour, and I think we were just in a better headspace. Eric was fired up and kept throwing music at me. The first song was actually “Children of the Next Level,” which could’ve been off Brotherhood, but the rest of the album went in a different direction. Eric was writing from a different vibe and delivering different flavors. Songs like “Ishtar’s Gate” and “City of Angels” have different moods.

“City of Angels” stood out as my favorite.
There’s actually a funny story, because “City of Angels” wasn’t supposed to make the record. I didn’t wantit to. I was against it for a whole nine months, right up until we were due to enter the studio. Then, I played it for the guy who I collaborate with writing lyrics, and he came back with some lyrics that fit perfectly, about the Night Stalker. I mumbled my way through it, because I wasn’t exactly sure how I was going to approach them yet. I took them home and tried it in the studio maybe a day or two later. I tried experimenting with some different vocal textures and did some harmonies, which I never do. It was cool to find different things to do on our 13th record.

That song, “Children of the Next Level,” and “Dream Deceiver” are the best songs.
“Dream Deceiver” is another one, that one has an old soul. I knew it right away the first time I heard it. That was one where I actually wasn’t finished with lyrics prior to hitting the studio, but I just sat in a room with Eric and let the tape roll. I started throwing out words, and “dream deceiver” on the chorus just came out and stuck. They immediately wanted me to keep it, but I wasn’t sure, because I thought it was the obvious, melodic approach to it. They were really stuck on it, so we kept working on it. It definitely has that old soul, like an early Scorpions vibe.

The person you collaborate with on lyrics, is that Del James?
Yeah!

That’s funny, because when I was researching my questions, I saw that name and hadn’t thought of him since the RIP magazineera!
Yeah, Del was chief editor down there! He still works for Guns N’ Roses, and we’ve been writing partners for like 20 years.

Were you guys hands on with the production? Andy Sneap mixed Titans of Creation, and he’s been criticized for cleaning things up too much, but this one doesn’t feel like that. It feels a bit dialed back.
We clean it up pretty good before we give it to him for mixing. Eric and I do all the tracking down here in the Bay Area. We get it pretty clean and tight, and it really starts turning into the record once we give it to Andy. He gets the separation and the bigger drum sounds. He has an ear for catching the little things that I’d miss. For me, he gets the bass and drums to sound killer.

Having the bassist and drummer you have, it’s a no brainer. You have a wrecking crew!
Oh yeah! The songs came alive because of Steve [Di Giorgio, bass] and Gene [Hoglan, drums]. Most of these songs I hadn’t even heard with the bass until we actually tracked them, because they’re written with guitar, me, and drums.

“WE HEAR DIFFERENT THINGS ALL THE TIME ABOUT HOW THE END OF THE YEAR MIGHT LOOK, BUT WE JUST TAKE IT A DAY AT A TIME.”

Is it hard to look at Testament’s career when you’re on the inside, as opposed to someone like me, who’s debated your discography with friends for so many years? Is it hard to separate all the different periods in the band’s history?
No, it’s not difficult to separate, because it’s been me and Eric taking it full circle through most of it. There were times where we could’ve been split up and be done, but Eric and I did stick through it through thick and thin, and we’ve been fortunate to reconnect with Alex, Greg [Christian, bass], and Lou [Clemente, ex-drummer] after I beat cancer. Things just felt really good, and now they’ve changed again, once we picked Steve and Gene back into the group—that was killer. We all get along on the road as a band, too. We never bicker. We’ve all done it long enough to know how to tour and be away from home.

I’m assuming the spring tour is postponed because of what’s going on right now.
Well, every tour is. The April tour was postponed, and we’re looking at European festivals that have already canceled. It’s not looking good. We hear different things all the time about how the end of the year might look, but we just take it a day at a time. It’s gonna take some time for us to recover, as far as that culture goes.

And are you feeling okay?
Yeah, I’m four weeks after being home and recovering from the illness. I think we’re about 100 percent back to normal.