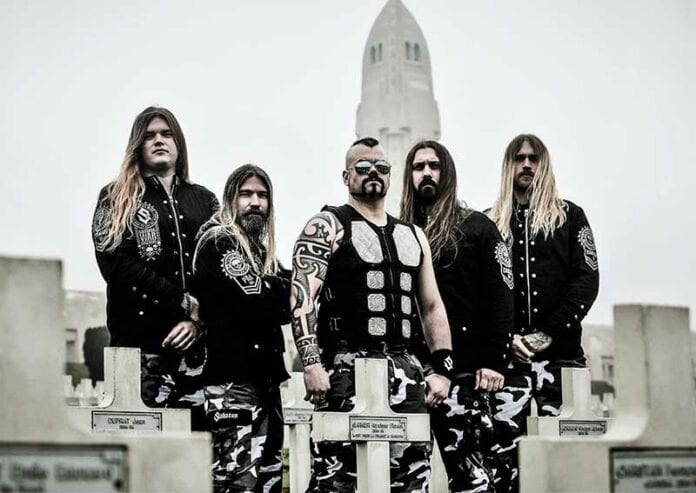 Get your battle gear on, we are going to war! Military-esque legends Sabaton have released their newest album, The Great War. Inspired by the events of one of the most monumental wars in history, this World War I record shows the metal scene just how incredible real life history can be. We had the opportunity to go deep with Sabaton bassist Pär Sundström on everything to do with the battle metal band’s ninth record.

How are you feeling now that The Great War has been released?
Right now, I am just excited to have it out there. We have been waiting so long to present the full album for the fans, while we presented it for hundreds of journalists who all agreed that it is probably our best album ever.

The Great War tells the stories of World War I—a war that hadn’t been covered in previous Sabaton albums. Why did you decide to do World War I for this record?
In the past we did several songs about World War I, but we never did a full album until now. World War I has so many stories, and we thought as we were coming up to the 100th anniversary of the Armistice Day, which sort of ended World War I, that it was good timing to do a concept album about this now.

Was there a World War I story that didn’t make it onto the record that you wish did?
Several! One of them being what is referred to as the Christmas Truce. But the music comes first, and if we don’t have a song that fits to a certain topic, we cannot do them.

Your love of military history is very evident. What got you so hooked on knowledge of wars?
Initially, it was an idea to write about something that was from the real world instead of fiction or fantasy. War, history, and battles have been used in heavy metal by many artists and it is a proven concept. However, I think today Sabaton is the one who took the concept furthest.

Are all of you war history buffs?
Definitely not. History is a small interest compared to heavy metal in our lives, and also not all guys are even into it. I like it, and if I watch a movie that is based upon real events or real people I know I will like it more than if it is a complete fictional story. The interest grows over the years, though, especially now that we launched the Sabaton History channel.

You have album stories up on your YouTube channel about The Great War. What inspired releasing these?
I find it always good for fans to get an insight into what the songs are actually about.

Sabaton also has an educational history channel on YouTube. Will there be videos discussing the songs from The Great War on there?
We already released several episodes based on songs from The Great War, and it is nice to premiere a song through this. Fans will then know the background to a song before they hear the actual song.

Do you think at some point educational facilities might use Sabaton to teach students about military history? How would you feel if your music videos and songs were used in a classroom?
This has been done for many years, both musically, lyrics, and videos. From all around the world we have received many emails where people explain how they use our music to teach or learn history.

The Great War is the first studio album to feature guitarist Tommy Johansson. How did this affect the recording process?
We have a very well functioning system with how we record albums and not so much changed when Tommy was in the picture regarding the recording. He contributed in writing one of the songs for the new album.

“WE HAVE NOT EVOLVED TO BE SOMETHING ELSE THAN WHAT WE DECIDED WE WANTED TO BE 20 YEARS AGO.”

With Sabaton’s wild 20 year history as a band, how do you feel your music has progressed over this duration?
I am proud that it’s so easy to hear that it’s still Sabaton, that we have not evolved to be something else than what we decided we wanted to be 20 years ago. Sure, some songwriting skills have improved, as well as the musicianship. It would be weird if 20 years did not improve that.

How did you settle upon which songs would be released as singles? How did you come upon the order of their release?
This is a process that has more different variables than space travel. For me, it is important that a single comes with a story, that perhaps connects to a certain date or place in the world.

How are your shows going to change with the inclusion of this new album?
We have built a stage set that should resemble a bit of World War I—trenches, bunkers…and we still have a tank. We just upgraded it.