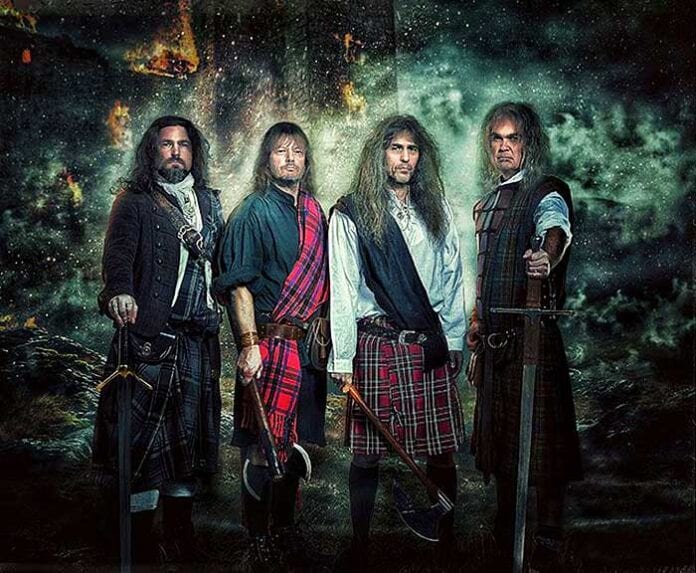 German heavy metal pioneers, Grave Digger, are one of the most reliable metal bands around today. That is, you know exactly what to expect when you spin a new album. Formed in 1980, the Teutonic titans—featuring original, gravel throated vocalist Chris Boltendahl, guitarist Axel Ritt, bassist Jens Becker, and drummer Marcus Kniep—have consistently released quality albums throughout its 40 year existence.

On its 20th full-length album, Fields of Blood released by Napalm Records, Grave Digger completes its Scottish historic trilogy concept it began on 1996’s Tunes of War and then with 2010’s The Clans Will Rise Again. Every track on Fields of Blood boasts all of the Grave Digger-isms fans have come to know and love, and is the ultimate way to celebrate the band’s 40th anniversary. The kilts are back on!

During this self-quarantine due to the worldwide coronavirus pandemic, how are you channeling your creativity? What have you been up to lately?
We are waiting, sitting around, and hoping not to catch the virus. But meanwhile, we’re doing a lot of promotion for the new album, waiting for better times. Axel and I, the guitar player, are really creative guys. We don’t have the mentality to sit around here waiting for somebody to send us some money! We are in the middle of thinking about a new album. Because as long as we can’t play live, we are writing new songs and preparing for a new album during this crisis. So, we’ll release a new album definitely next year or in the middle of or after the summer.

Obviously, the coronavirus has put a damper on the band’s touring plans. Were there any conversations between you and Napalm Records about delaying the album’s release date?
Yeah, we thought at the beginning when the crisis started to postpone the album. But it was more or less too late because we started everything—the promotion for the new album, and we had some deadlines we can’t move. It was a low possibility. But it’s equal—if you release it now or in five months. The only difference is in five months, everybody will release theirs because so many bands postponed their stuff. So, I think it’s better now to release it. It’s at the right point now.

“HE’S MOVING BACK IN HIS OWN HISTORY, A THOUSAND YEARS BACK, WHEN EVERYTHING STARTED WITH SCOTLAND.”

Fields of Blood is the end of the Scottish Highlands trilogy. How did you go about creating this album?
As you know, Tunes of War was more or less some kind of history lesson, like a musical history lesson that’s cool. The Clans Will Rise Again was about some mystical side of Scottish history, and the new one is a little bit different. Two years ago, I stayed with my family in Scotland and my son, who was 12-years-old at this time, and we moved around and went to all the battlefields and a lot of castles. I told him the story of every castle and the battlefields. And then in one museum, there was an old man sitting in a corner and he was sleeping, and I recognized that he was working there. And then I imagined by myself that he was some kind of clans warrior. And he day dreams when he’s sitting around sleeping in the museum, that he’s moving back in his own history, a thousand years back, when everything started with Scotland. And then from this point of where he started, he moved to the side of William Wallace and Robert the Bruce and Queen Mary, and in the end he fought together with his Highland brother and he’s telling the story from his emotional side, because he was at all these places and he met all these people. And that is the difference. That it is not the kind of history lesson where there is another point of view. It’s a little bit more of a personal point of view.

Have you ever lived in Scotland or just visited there? What’s your fascination with the history of this country?
I always was interested in history, especially the history of Britain and Scotland. You have to be there. There’s a special fascination if you move through the Highlands. You can breathe the air of the battle of the clans and all these things. And also the sound of the great Highland bagpipes, it’s amazing and this makes something in my head. And this was the reason why I told Axel from my vacation two years ago that we have to do another album because the story isn’t at the end so far. We created Fields of Blood, and the title track is the last song we ever wrote about Scottish history. Now, we move forward with other topics for the next album.

“THE TITLE TRACK IS THE LAST SONG WE EVER WROTE ABOUT SCOTTISH HISTORY. NOW, WE MOVE FORWARD WITH OTHER TOPICS FOR THE NEXT ALBUM.”

The bagpipes play a big part in this album, and it’s an instrument that wouldn’t normally be associated with heavy metal. How did you fit them in with the atmosphere of the record?
For us, it was really important, because on the last two Scottish albums we also had bagpipes, but not in the way we did it this time. We exactly composed heavy metal songs, including bagpipes. And last time we made heavy metal songs and added some bagpipes. But this time it was different songwriting. That is the reason why it sounds more compact, that you have the vision that the bagpipes are more of the music than on the last record. That was very important to use it as a folk instrument, as a battle instrument like it was in the beginning. We recorded the bagpipes in the studio and we had three bagpipers, and you can’t stay in the recording room when they play. Three bagpipes, it’s like killing your ears, it’s unbelievably loud. We wrote the songs for the bagpipes more or less, because that was the target, that we use more bagpipes than on the older Scotland records, because this is the main instrument of the Scottish people and also a very important music instrument of the Scottish history.

How did the guest vocal duet with Battle Beast’s Noora Louhimo on “Thousand Tears” come about? Didn’t you initially try to get Alissa White-Gluz from Arch Enemy?
When we got the “no” from Alissa, we thought of what we can do and then we thought about Doro again. But in the end, we wanted to sound a little bit more fresh. Then we remembered the band called Battle Beast that we toured with a couple of times playing festivals, and they have a really cool song already out called “Black Ninja.” And that is something I like and the voice of Noora is really outstanding, so we contacted her and asked if she wanted to be on the new record singing a ballad with me. And she said, “Yes, cool, let’s do it.”

Fields of Blood also boasts the brilliant cover art by Alexander Tartsus (De Profundis, Depravity, Sepulchral Curse, Sinister). Did you have to give him much direction, and did it turn out exactly how you envisioned it?
I had an idea when I contacted him. I thought for this album we needed something different. Normally, we were working together with a guy from Hungary, Gyula Havancsak, but this time I wanted to have this old-fashioned feeling. I think the sound of the new album is not old-fashioned, but that is the reason why I contacted Alex to do something that also could be painted in the 80s. And I think he did a really good job on it. It has a lot of details, good atmosphere, it’s a good handcraft.

“I FEEL THAT THIS HISTORY IS SOME KIND OF PART OF MY LIFE. WE CAN DO THIS KIND OF MUSIC BECAUSE WE LOVE IT.”

The production is very robust and hefty. You mentioned how loud it was in the studio with the bagpipes. What was the recording process like? Sound wise, what were you hoping to achieve?
We’re always working with the same schedule, the same style when we’re doing the production. We make a complete reproduction with everything in the end. More or less, this sounds like a production, but we use it as a pre-production. And then with the pre-production, we go into the studio and record it in a more professional way with a big studio and a good engineer. We’ve practiced this since 1995 in the same studio and one hand knows what the other hand has to do. That is really easy working. Everybody in the band has their own studio. But this year we recorded bass, vocals, bagpipes, and drums in one studio, where we also do the mix, and Axel, the guitar player, is doing all his guitars in his own studio. And I do a lot of vocal spots in my studio, so we are working at different places.

Since Grave Digger is celebrating its 40th anniversary, will this new album have a special place in the band’s and your fans’ hearts?
I think that I understand the Scottish history now and its complete wideness and everything. That is the reason why I’m really proud of the new album, because I could put my heart and my soul into this album because this history is a part of mine. I’m not Scottish, I’m German, but I feel that this history is some kind of part of my life. We can do this kind of music because we love it. That’s the most important thing. And if you do what you love, it’s not a kind of job or something. We do it with a lot of passion and we can’t stop. We are addicted to writing songs and playing live. That is the life of a musician. We can’t stop it.