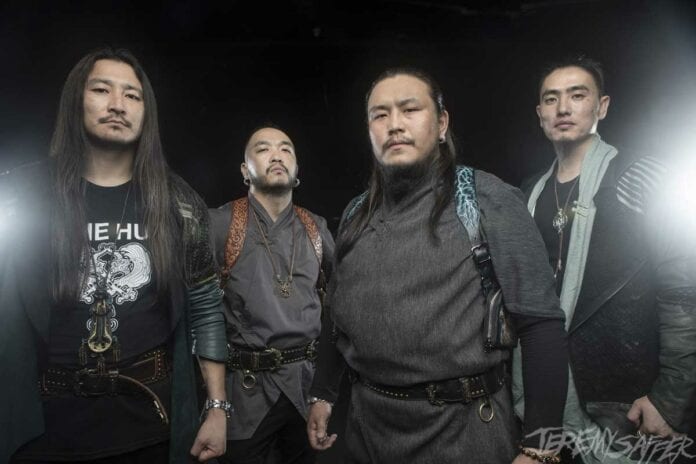 INTERVIEW WITH THE HU BY SYLVIA LENORE
PHOTOGRAPHS BY JEREMY SAFFER

The Hu is taking North America by storm, from the band’s headlining tour to their innovative style of “hunnu rock”—a captivating blend of modern heavy rock and Mongolian folk music sung in their native tongue and using traditional Eastern instruments.

Gaining viral international success from their debut music videos, which are comparatively epic to a scene from Game of Thrones, The Hu was quickly scooped up by Eleven Seven Music and recently released their debut full-length album The Gereg.

We were able to catch up with the band via their translator and manager Tuga to get the scoop on the motivating message behind their music and how it’s translated with fans worldwide. They also taught us some Mongolian!

You’re touring North America for the first time ever, including several sold out shows. How does that feel?
After playing over a month in front of so many amazing crowds in North America, we feel so much connection, love, and support. Our fans chant with us, they sing with us, and they mosh with us. After our headline shows, we are so exhausted, but we still go to the merch booth so we can meet and take pictures with every single fan and supporter of our music because we love them and we want them to know our gratitude.

What are some of the biggest cultural differences between Mongolia and North America?
To be honest, we don’t see much of a difference. We love it here.

“WE HOPE OUR SONGS AND OUR MESSAGE WILL TRANSCEND ALL CURRENT LANGUAGES.”

Seeing as you speak only Mongolian, have you encountered any difficulties while touring abroad? What about connecting with fans and audiences? Any funny lost in translation moments?
We’re not concerned about language. Our energy and our music are intended for all people who speak languages we love but don’t always share in common. Much the same as great operas were originally written and sung in Latin, that did not exclude audiences from other languages from producing and enjoying them. We hope our songs and our message will transcend all current languages. It’s the truest form and method for us to deliver our message in the sincerest way.

Mongolia is known for its vast countryside and nomadic lifestyle. Do you live in its urban areas or do some members live in more rural areas? How does this affect the band, both personally and musically?
We all live in the capital city, Ulaanbaatar. Some of us grew up in the countryside. Our music is deeply connected to Mongolia and its culture.

You’ve created the term “hunnu rock” to describe your sound. Can you elaborate on what this means and how you came up with that name?
Hunnu rock is East meets West, old meets new, and traditional meets modern. Hunnu is an ancient Mongol empire, aka the Huns in Western culture. We use traditional instruments, including morin khuur, tovshuur, tumur khuur, tsuur, and khengreg. They all have their own unique sounds and they’re all crucial to our genre.

Your debut album The Gereg is out now via Eleven Seven Music. How did the label find you and what was the signing process like?
After our two music videos [“Yuve Yuve Yu” and “Wolf Totem”] went viral on YouTube, we received offers from multiple record labels. We chose Eleven Seven Music because we felt they were the right label for us. We are so humbled and honored to be on the same roster with Mötley Crüe, Five Finger Death Punch, Papa Roach, In Flames, Hellyeah, and Bad Wolves. Our label is super supportive of us, and we’re very thankful.

The Gereg takes its name from the term used for the first diplomatic passport during the rule of Genghis Khan. Recently, this came full circle as the band was given the title of Cultural Envoy of Mongolia by the Minister of Foreign Affairs of Mongolia. What message do you want foreign audiences to take away from your music?
Our message to the world via our music is reminding the importance of showing gratitude to your parents, loving your homeland, protecting the nature, loving and respecting women, respecting your country’s history and ancestors, and finally, giving individuals an inner power and belief for their future.

You just released a new version of “Yuve Yuve Yu” with guest vocals from Danny Case of From Ashes to New. How did this come about? What was it like to hear your lyrics being sung in English?
We’re on the same label, so it was an easy process for us to collaborate. Danny is a very talented singer, and we are open to trying new things, including English lyrics. We love the collaboration.

Do you have any more collaborations planned? If so, can you share whom they are with? If not, who would be your dream artist or band to collaborate with?
We are also collaborating with Lizzy Hale of Halestorm on another song from The Gereg album, and we are super happy with the outcome. There are so many bands we’d love collaborate with, such as Metallica, Slipknot, System of a Down, Dave Grohl, and the list goes on.

Wrapping up, can you teach us a popular Mongolian phrase or slang word?
“Sain uu.” It means “Hi.”

EXHUMED: The Horror of It All