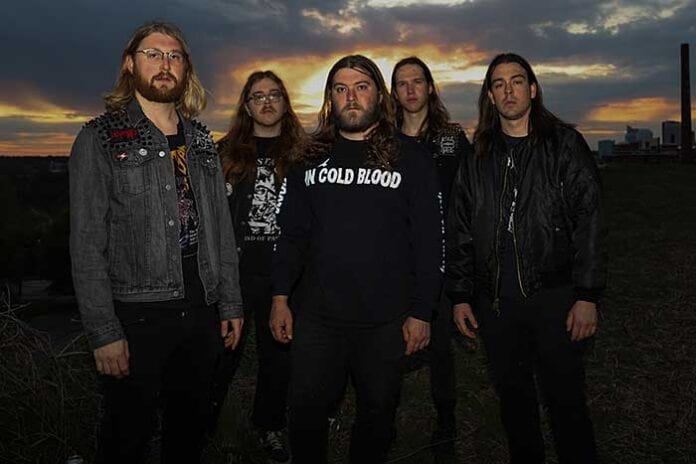 “I didn’t necessarily grow up in Richmond, but I moved here in 2008,” vocalist Knox Colby explains during a recent phone interview. “Moving here and always listening to those bands, I’d think they were gods and were untouchable. But you’d see them around town—Richmond’s not that big of a city—and I was around those people all the time. As I’ve gotten older, we’ve played together. We went on tour with Iron Reagan, we’re all friends now. I went to Land Phil’s birthday party and Randy Blythe showed up for that, and we just hung out and had a good time. It’s far less scary or daunting now, they’re just people, too.”

Formed in 2016 out of the ashes of various disbanded hardcore and punk bands in the Richmond area, Enforced—also featuring bassist Ethan Gensurowsky, drummer Alex Bishop, and guitarists Will Wagstaff and Zach Monahan—quickly found a dedicated fan base in the local scene. Thriving on a DIY aesthetic, Enforced has always done things its own way.

“WE HAVE A VERY STRONG WORK ETHIC AND WE ALWAYS HAVE A NOSE TO THE GRINDSTONE MENTALITY.”

“If we were going to start a band, we were going to have to do everything ourselves—book your own shows, book your own tours, talk to people throughout the country,” Colby explains. “Just do it for yourself, because no one else is going to do it for you. That’s kind of how we’ve always operated. Working in the music industry now with Century Media, it’s still the same way. We spearhead a lot of stuff Century throws at us. We have a very strong work ethic and we always have a nose to the grindstone mentality. We take care of a lot of stuff ourselves, which I appreciate and enjoy because I know that it’s a job done right.”

On Enforced’s second full-length album, Kill Grid, the band’s sound has steadily progressed compared to its early demos and its 2019 debut album At the Walls. On Kill Grid, the ferocious quintet is in full attack mode on its nine blistering tracks.

“The songs are a lot more considered, a lot more thought out,” Colby says of Kill Grid. “Over time we’ve gotten a lot better by just playing constantly. We’ve had two lineup changes. We had our original drummer Zack [Hullinger] and bassist Connor [McCormick] who have since left. Now we have Alex [Bishop] on drums and Ethan [Gensurowsky] on bass. We’ve had them for almost two years now. Their sound fell in with the lineup and what we can do. There’s a lot more double bass, it’s a lot thicker, it’s a lot stronger. And the songs are a lot longer. We’re rooted in the hardcore scene, but we’re very much a metal band. That’s just a natural progression of where the sound took us.”

“WE’RE ROOTED IN THE HARDCORE SCENE, BUT WE’RE VERY MUCH A METAL BAND.”

Enforced received quite a bit of buzz and high praises for its 2019 album At the Walls. However, as cliché as it might sound, the band doesn’t want to get caught up in the so-called sophomore jinx.

“I’m totally aware of the sophomore stinker,” Colby admits. “It’s been nice and super humbling to receive positive praise, but I’m sure there’s negativity out there, and I welcome that, too. I hope that people don’t think that way. I think that this is a far stronger album, and that’s a fact. It’s far stronger than At the Walls was. I’m in love with this album. If everyone hates it, I was going to write that album anyway. It doesn’t matter who put it out or who distributes it, if all we did was just play local shows, we would have still recorded Kill Grid.”

At nine tracks with a 41 minute runtime, Kill Grid actually flows rather well. However, there was a little concern from the band about the album length in this short attention span environment of the music listening public these days.

“I was worried about the album length—not the tracklisting or how many tracks—but 41 minutes seems long, for me at least,” Colby says. “But I’ve listened to it probably 600 times since April of last year and it never gets old. I can listen to the thing from beginning to end and it seems to just fly by. At 41 minutes, it doesn’t feel like it, which was a huge thing for me. I think it’s a really good flowing album.”

“WE FOLLOWED THROUGH WITH IT. WE HIT IT OFF FROM THERE AND KEPT THE BALL ROLLING.”

Originally signed to War Records, Kill Grid is the band’s first album with Century Media Records. Enforced won over the record label and piqued its interest in the band due to the strength of its debut album. However, when Century Media first contacted Enforced, the members actually thought someone was pulling a prank on them.

“Our thing with Century, we thought it was a joke!,” Colby says with a chuckle. “Will [Wagstaff] got an email saying, ‘This is so-and-so from Century Media A&R. We listened to you on Bandcamp and we really like it. We’d like to talk to you about doing a record.’ We didn’t answer it and the guy kept following up. Then we thought, ‘Shit, this might be real!’ So, we followed through with it. We hit it off from there and kept the ball rolling. It’s so stupid to think that it was a prank. Century Media gives us more distribution and more opportunities for people to listen to it across the globe, which is something I never thought about.”

Like At The Walls, Kill Grid was engineered by longtime friend Bob Quirk [Bloodspell, Iron Reagan] and mixed and mastered by Arthur Rizk [Power Trip, Cavalera Conspiracy]. Sonically, the album possesses a gritty but not too polished sound that fits perfectly with thrash metal, especially with the guitars up front in the mix.

“We were going for that classic thrash sound that has that type of production where it’s just gritty enough and it wasn’t recorded in a tin can and it wasn’t recorded surrounded by chrome,” Colby says. “It finds that happy medium in terms of production. We’ve always worked with Bob, even with our former bands, and we’ve come to know Bob and he’s one of our closest friends. He did At The Walls as well, he engineered that. So, when it came time to record Kill Grid, it was a no-brainer. And Arthur mixed and mastered At the Walls, so we already used him, too. We wanted to keep him on board as well, to keep the Enforced train chugging with who we know and what we have.”

Playing live with veteran metal bands such as Sacred Reich, Red Death, Iron Reagan, All Out War, and Integrity has shaped and strengthened Enforced into a lethal live machine.

“The more you work at something, the better you get at it,” Colby says. “Recording the album right at the heels of finishing the tour with Red Death was awesome, especially for vocals because I was warmed up—I’d been screaming at people for a month. Momentum is our number one strength. We exude a lot of energy and the audience takes that in and then they get energetic and that draws back to me to keep going and gives me energy. It’s like a cyclical relationship between the two. I thrive off of it. The crazier they are, the crazier I’m going to get. It’s going to make for a better show overall.”

Due to the ongoing global pandemic and the uncertainty of touring still up in the air, Enforced will have to wait it out just like the rest of us.

“We still need to promote the album,” Colby says. “We’re already working on new stuff, but we don’t want to get ahead of ourselves because lord knows when we can actually tour on Kill Grid. Livestreams seem to be the standard, but the live vibe gets lost. So, I don’t know how to proceed because it doesn’t seem like we’re too hell-bent on doing them. If we were, we would have done one. As far as everything else, we might make more videos just to keep the juices flowing creatively. The restrictions here in Richmond are pretty tight. Our last show was right before cancellations in March of last year. It’s been over a year since we played live.”