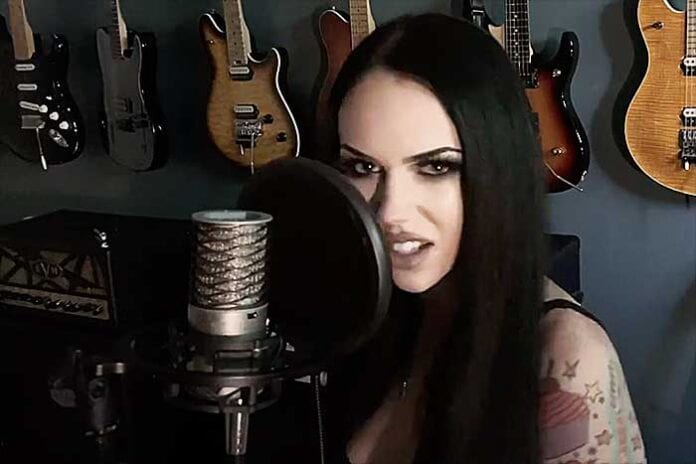 What’s the difference between making a good vocal cover and an awesome one? There are several factors that can take your videos up a notch, but let’s start with what I believe to be the most important thing when recording vocal covers at home—the microphone. Of course, you can record something decent using your cell phone’s microphone, or whatever device you may already have handy, and there’s nothing wrong with that. However, if you do have the ability to invest in a high-end product, you’ll be very glad you did.

The microphone I use for my at-home recordings is the Aston Origin microphone, with the Aston shock absorber and a pop filter. I decided to go with the Aston Origin microphone after seeing the five star reviews online and also because of the price. This microphone along with the shock absorber only put me back about $500 CAD (around $390 USD) with tax, and the pop filter was under $20. For how high quality of a microphone the Origin is, this is a fantastic value. I honestly didn’t think I could get anything with as crisp and clear of a sound to it for under $1,000, but I was wrong. I’m sure if I did splurge on an insanely expensive microphone I’d be able to get even better quality, but for someone on a budget (and who isn’t anymore?), this is certainly the best option for its price range. My next purchase will be the Aston Halo Reflection Filter to help bring up the quality even more, but for now, I’m quite happy with my current setup.

The second most important part of recording a kick-ass video is the camera. I shoot my videos using a Google Pixel phone I have without a SIM card in it. I bought this phone to use as a camera, because of that whole being on a budget thing, and it is much less expensive than a DSLR but still has great quality. Now, of course, I will one day upgrade this to a professional quality camera, but in the meantime, this camera is doing the trick. My regular cell phone is an iPhone, which, as much as I love iPhones, aren’t the best cameras around, especially in anything other than natural lighting. For shooting in my music room with limited natural lighting, the Google Pixel captures a surprisingly HD picture. There is some grain to it. I’m not saying it’s perfect, but using the back camera on a cell phone (never the front one!) usually does get a YouTube-worthy result.

Next is the editing. I have just enough recording experience to navigate Reaper, my Zoom R16 Audio Interface, and properly use my Sennheiser headset and Aston microphone—that’s about it. When it actually comes to editing the vocal covers, I have a guy for that. My friend Tyler Martin at Sabretooth Sound (Facebook, Instagram) is a local audio engineer who I send all my files to, and he sends me back a perfectly edited cover. I like having Tyler edit my covers because he does not over-edit. I don’t like the heavily autotuned sound, especially not in covers. I record several takes of each song, and Tyler picks through them to find the best parts in each one and gets me that professional studio sound. If you’re someone like me who doesn’t have experience in editing or mixing, I recommend hiring someone to do it for you. It helps make your covers sound way more professional than they would without any editing, plus then you’re supporting a fellow musician. But if you prefer the unedited sound, that’s cool, too. I just personally prefer the professional studio sound.

When I’m recording a cover video, I treat it like a performance. Not quite to the extent of an actual stage performance with an audience, but I do make sure my hair, makeup, and outfit all look badass. Visuals are super important in entertainment, especially on a platform like YouTube. Having a thumbnail where you look like a total rockstar is way more likely to get people to actually click on it than if you just filmed in your pajamas with your hair in a messy bun and no makeup. You’re trying to capture people’s attention and looking like a rockstar definitely helps! Plus, confidence is everything. If you feel awkward in front of the camera, your audience will be able to tell. For people that are camera shy, just imagine it’s a regular performance and the camera is the audience. I find making eye contact with the camera looks great, too.

Finally, song choice. I personally don’t have a niche when it comes to my YouTube channel. I cover everything from screaming in metal songs to Disney Princess songs. I feel like versatility is a great thing to have and for many reasons. It showcases your abilities and your range. It attracts a broader audience, and it’s fun! If I only ever recorded one type of song, like only heavy stuff or only ballads, I would get bored of it pretty quickly. Singing all different genres and styles keeps your channel fun and fresh for both your viewers and yourself. The only thing that gets tricky with song choice is finding songs with a karaoke or instrumental version available. Many songs I like and think, “Oh, I would love to cover this song!” don’t have a karaoke version anywhere on the internet. It’s definitely easiest to cover more mainstream material, since it’s more likely an instrumental version exists and is usable. I would love to try doing covers where I have my band, Living Dead Girl, record the instrumental, but unfortunately with the super strict lockdowns in Ontario, it’s not totally possible to do that at the moment. None of us have home studios set up for recording guitars, drums, etc., so for now I just stick to my karaoke tracks.

I’ve been posting covers on my YouTube channel since last May, and the amount of love and support I’ve gotten on them has been amazing! I love making them and I love sharing them. Nothing can replace the experience of attending and playing concerts, but if we can’t have them, this is something that I feel can really help musicians that are depressed at home. I bought the microphone and began making these videos early on in the pandemic, and I am so glad I did. If I can’t perform on a stage, performing in my music room in front of a virtual audience is the next best thing.

12 MUST-HAVE SONGS FOR YOUR QUARANTINE PLAYLIST