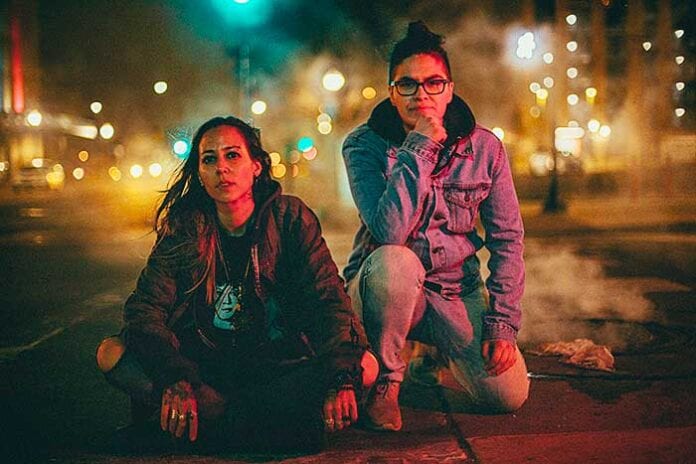 Tarah Who? well, “she” equals “they,” and “they’re” a power duo masterminded by grunge punk frontwoman Tarah Carpenter, who channels explosive emotionality into rousing anthems alongside drummer/backing vocalist Coralie Hervé.

Tarah Who? · Illusion Of Freedom

When asked about their new single Tarah said, “‘Illusion of Freedom’ is my experience with immigration. Not only as an immigrant myself but also what I have witnessed as a friend of people from all over the world. Whether I was in France and friends with people who were trying to get their papers, or here in the US. There was a time where my co-workers were too afraid to come to work, too afraid that they would be taken and sent back home or separated from their families, even if they had been living here for over twenty years. ‘Illusion of Freedom’ is also a reflection on the situation with refugees. People, families, who had to flee their country to feel safe somewhere they were not necessarily welcomed by everyone. Governments and their people were afraid to lose their jobs, to lose their culture, to give too much to someone who has lost everything, not by choice of a new life, but by hope of survival. People who had career jobs where they were from, but everything was taken from them, and now they have to start from below where they started, in a different country, and language. ‘Illusion of Freedom’ is about those invisible boundaries that divide us as humans and cultures.”

Tarah Who? is set to release their new single “Illusion of Freedom” co-produced by Jason Orme(guitarist for Alanis Morissette) and Tarah, following the success of their 2020 EP 64 Women. This EP was dedicated to 64 women who were detained in an immigration detention center in downtown LA on November 19, 2014 alongside Tarah herself. This powerful theme of immigration is something that crosses over into Tarah Who?’s new single as she examines her relationship with immigration having grown up in France, and now living in Los Angeles.

The In-Between Tour: IN THIS MOMENT & BLACK VEIL BRIDES with...