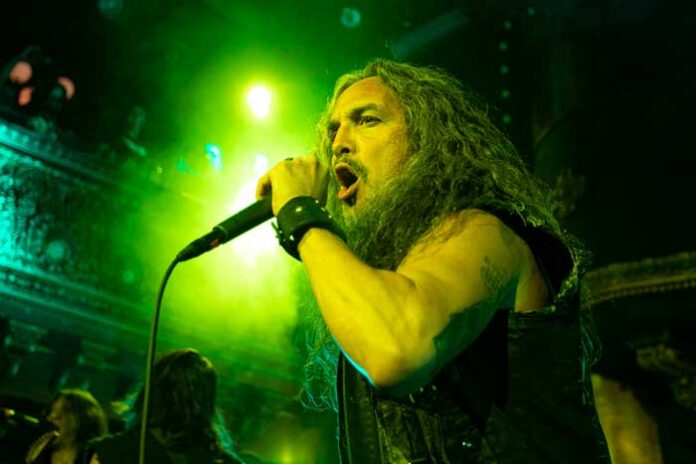 Although the much anticipated Bay Strikes Back tour featuring Testament, Exodus, and Death Angel has been postponed multiple times—it’s now slated to kick off on April 9, 2022—that didn’t stop Death Angel from playing a headlining, sold out show at the Great American Music Hall in San Francisco. And judging from the number of bodies flying over the barricade, as well as all the headbanging taking place, the band was sorely missed by their fans.

Traditionally, Death Angel has performed two shows around Christmas time (known as the “Another Death Angel Christmas Shows”), but the San Francisco thrash legends decided to hold off on 2021, this time opting for a single, more intimate evening that was also live streamed to their fans around the globe.

Opening their set with “Lord of Hate,” off of the Killing Season record, Death Angel wasted no time in energizing the crowd and getting them ready for what was to come. With guitarists Rob Cavastany and Ted Aguliar on either side of the stage, vocalist Mark Osegueda commanded the packed crowd as always and led the band through a 15 song, nearly two hour set that spanned their entire career. Highlights included “Thrashers,” “Aggressor,” “The Organization,” and “Absence of Light,” which also happens to be the name of their Imperial Stout beer collaboration with Ale Industries of Oakland, CA.

Wrapping up their set with classics “Bored” and “Kill As One,” it was evident that Death Angel has not lost a step during the pandemic, but in fact has gained momentum for the upcoming Bay Strikes Back Tour, so make sure you are there when they pull in to your city.