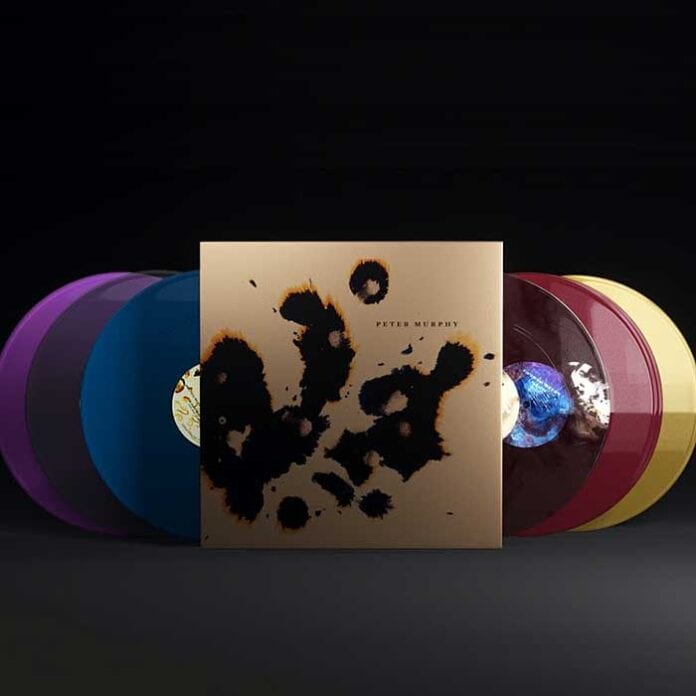 Beggars Arkive is excited to announce vinyl reissues for all five Peter Murphy solo releases on Beggars Banquet, plus the release of a brand new rarities album titled The Last And Only Star. Each album is pressed on colored vinyl, and the pressings are limited. The albums will be released in a series of three beginning in April. There is also the option to purchase all the releases in a box, designed by Chris Bigg. The box is limited to 500 copies worldwide and is only available from the Beggars Arkive webstore.

Peter Murphy’s solo career began in 1986 with the release of Should The World Fail To Fall Apart and continues to this day. In addition to his work as the frontman of the legendary and groundbreaking Bauhaus, he has released 10 solo albums, in addition to several live releases. Over the last few years, he staged several multi-night residencies where he performed a different album each night. He also recently reunited with his Bauhaus bandmates for shows.

April 9th
SHOULD THE WORLD FAIL TO FALL APART (1986) – Blue vinyl
Produced by Ivo Watts-Russell, who was chosen by Peter due to his This Mortal Coil production, this album was released in 1986. A review of the album around it’s original release by Melody Maker declared ”the man with everything to prove has just proved everything”.

LOVE HYSTERIA (1988) – Indigo vinyl
1988’s Love Hysteria was produced by Simon Rogers, who at the time was also playing with The Fall. It contains eight songs written by Peter with Paul Statham, plus a cover of Iggy Pop’s “Funtime”. Record Collector said that the album’s songs ”All Night Long, Indigo Eyes, Dragnet Drag and Blind Sublime managed to combine direct rock power with Murphy’s vocal gymnastics and imaginative way with lyrics.”

May 7th
DEEP (1989) – Clear vinyl
Peter’s third solo album saw him break wide open with the his biggest hit “Cuts You Up” which is often included in lists of the greatest alternative singles. Propelling him into mainstream stardom, Deep also had two additional fantastic charting singles – “The Line Between the Devil’s Teeth (And That Which Cannot Be Repeat)”, “Cuts You Up” and “A Strange Kind of Love”. Again produced by Simon Rogers, the critically acclaimed album is still a fan favorite.

HOLY SMOKE (1992) – Smoke vinyl (clear and black smoke blend)
The fourth Peter Murphy album Holy Smoke contained the single “The Sweetest Drop” which made it onto the modern rock charts. It was an elegant follow up to Deep with crisp production by Mike Thorne. As written in the original press release for the album, “You can’t pin down HOLY SMOKE, it curls and eddies in white and blue swirls, drawing a series of patterns on the brain, but just when an image begins to come into focus, the music mutates into something hypnotically new”.

June 25th
CASCADE (1995) – Scarlet vinyl, Double LP + four bonus tracks
His last solo album for Beggars, Cascade came after a time of change for Peter Murphy. He had dissolved his longtime backing band and moved to Turkey with his family. After a year of soul-searching and re-discovery, the songs flowed. He said “It confirmed my belief that writing – like painting or any art form – comes from a very silent place that’s not dependent on outside stimulus. It was like rediscovering the initial innocence and purity that’s there when you join your first band.” The album was written with Paul Statham and produced by Pascal Gabriel. It also contains guitar work by noted artist Michael Brook.

THE LAST AND ONLY STAR (Rarities) – Gold vinyl
This album of rarities was curated by Andrew Brooksbank and Stephen Webbon with Peter Murphy’s guidance. It contains 10 rare tracks that are demo versions, remixes and edits.

A1: Final Solution (Club Mix 2)
A2: The Light Pours Out Of Me (Original Version)
A3: Tale Of The Tongue (Single Edit)
A4: I’ve Got A Miniature Secret Camera
A5: Strange Kind Of Love (Remix Edit Version)
B1: Cool Cool Breeze
B2: The Sweetest Drop (Rave Edit)
B3: Groovy Place
B4: Wish
B5: Jemal (Version 2)

WOLVES IN THE THRONE ROOM Shares “Spirit of Lightning”