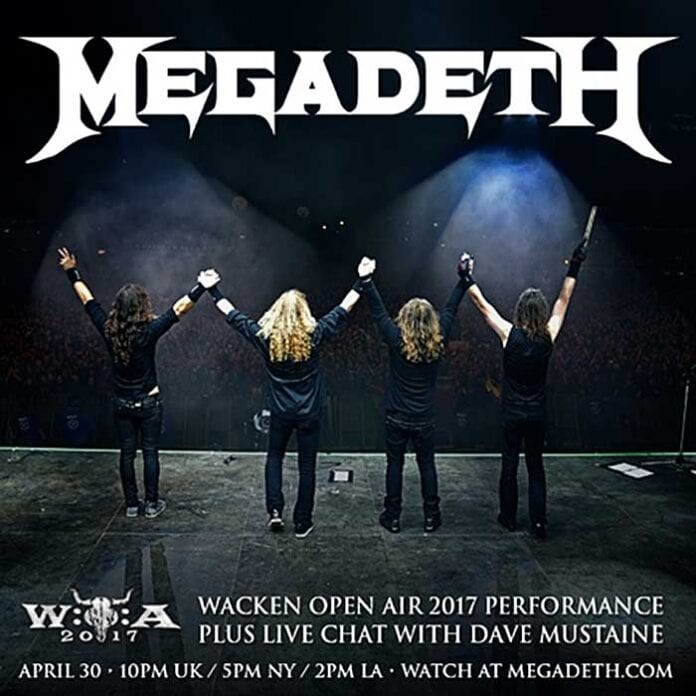 Today at 2:00 pm PST/5:00 pm EST/10:00 pm BST, MEGADETH will stream their Wacken Open Air Festival 2017 performance, in its entirety, on Megadeth.com. During the performance, Dave Mustaine will be doing a live chat with fans, telling anecdotes and answering questions.

Megadeth’s new line of exclusive merchandise designs was scheduled to launch this month, so in light of Covid 19, a special Vic Rattlehead face mask was designed to include with the merchandise. A portion of all the proceeds go to MEGADETH’s road crew and production team. Last month, Megadeth donated a portion of their online merchandise sales to Covid19 charities.

“As we continue to self-quarantine,” says Dave Mustaine, “my thoughts go to all the production teams and road crews out there who count on artists being on the road to make a living. They are the driving force that help make things happen. It’s the road crew that help keep everything running smoothly,” continues Mustaine, “and make the show sound and look the way we envision. MEGADETH’s crew are the best in the business. We are the MEGADETH family and I want to do what I can to help ease some of the financial stress they are currently experiencing.

On August 4, 2017, MEGADETH performed a blistering set to approximately 75,000 metalheads at Wacken Open Air Festival in Germany. This is the first time the performance has been made available online airing originally only in Germany. Kicking off with “Hanger 18,” the band played a mix of classics such as “Wake Up Dead,” “Peace Sells, “Symphony of Destruction” and “Mechanix,” as well as newer tracks including “Fatal Illusion,” “Poisonous Shadows” and their GRAMMY® Award winning track “Dystopia.”