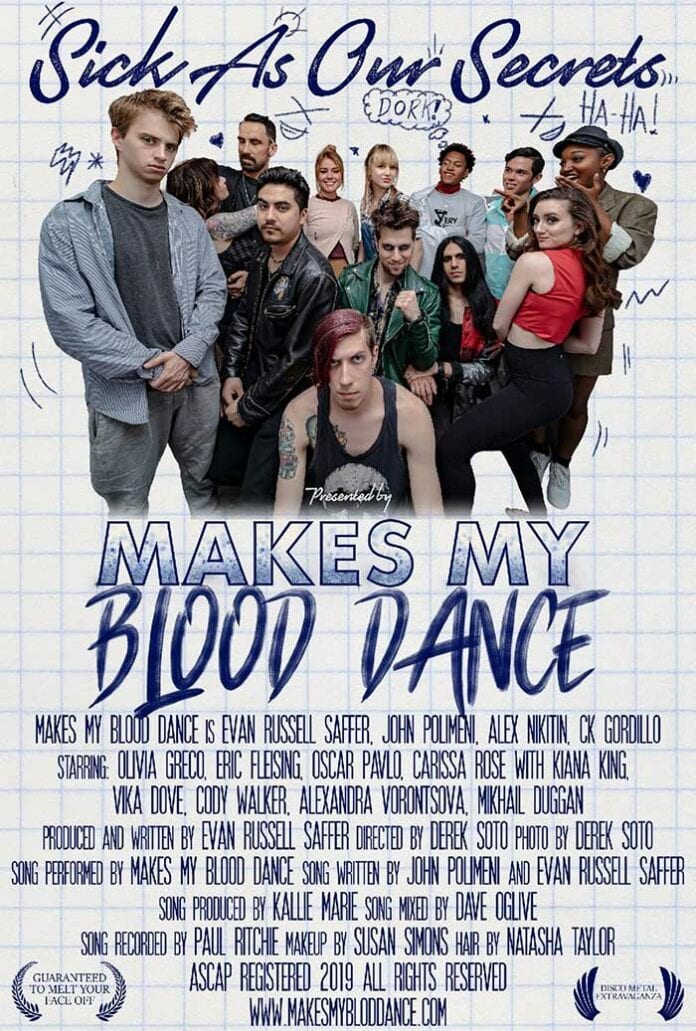 Brooklyn based “disco metal” quartet MAKES MY BLOOD DANCE has revealed a second video, “Sick As Our Secrets,” from their upcoming album of the same name.

MAKES MY BLOOD DANCE is as wild, diverse and, yes, insane as the County of Kings. Anyone can take disco, glam, electropop and metal, throw them in a blender and call it a song. It takes some kind of twisted genius to make that kind of Molotov cocktail into something that you won’t stop listening to – and can’t stop moving to. “Sick As Our Secrets” drips with Sunset Strip swagger and tight New York City grooves, but amidst the chaos, there’s a message of hope.

Vocalist Evan Russell Saffer says, “We are doing something fun while also shedding our confessions in each of our songs. ‘Sick As Our Secrets’ is a slogan I learned in recovery, which means we’re carrying around a lot of guilt and giving away our psychic energy for no reason. Many of us beat ourselves up, judge ourselves, judge others because deep down we feel shame. MMBD puts that bag of rocks down and celebrates with an uplifting, dance and groove-oriented vibration that gets our hearts bouncing and our blood pumping.”

For “Sick As Our Secrets,” MMBD once again used the producer/director tag team of the band’s Evan Russell Saffer and Derek Soto of Sinestra Studios. The video captures the band in their natural habitat — a dingy rock club, where you get a taste of MMBD’s killer live show, with each member playing as if their lives depended on it. The live footage is juxtaposed with an eerily timely narrative of an alienated, misunderstood man walking away from a prison-like home, presumably with bad intentions. The band’s message of unity and acceptance plays out here and he finds “his people.” The video also features segments of dancer Olivia Greco immersed in the music.

“We like to showcase dancers and movement,” Saffer says. “We have captured that free spirited, don’t take yourself too seriously, uplifting vibe in our songs and videos. We’re not perfect, we struggle, but we’re healers, healing ourselves and each other one day at a time and rockin’ the casbah doing it.”

“Sick As Our Secrets” was mixed by David Ogilvie (Skinny Puppy, Rob Zombie, Marilyn Manson) who knows a thing or two about unleashing a beast of a song in the studio.