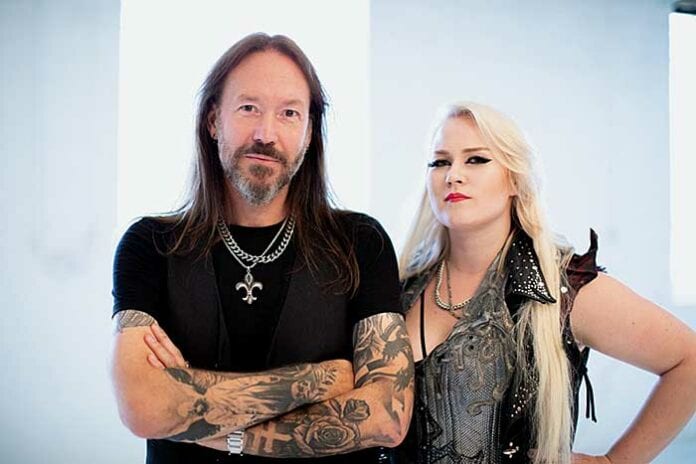 HAMMERFALL has revealed a new version of their beautiful, energetic ballad, “Second to One,” featuring Noora Louhimo of Battle Beast. The original track was featured on HAMMERFALL’s chart-breaking album Dominion, which was released in August 2019 via Napalm Records. Noora Louhimo’s bittersweet vocals compliment Joacim Cans’ equally multifaceted performance, making this duet a true musical highlight of the new year. Beautiful harmonies, emotional storytelling and powerful vocal lines weave throughout the song and will light your way in dark times. The song preaches themes of trusting your instincts and following your own heart, as well as taking time for yourself.

Guitarist Oscar Dronjak on “Second to One”:
“It all started with Joacim suggesting we should try to write a song together with our long time producer James Michael. We went over to Los Angeles for a weekend, not knowing what to expect. Within the first 30 minutes, I played an idea I had for James. He immediately responded with some chords and melodies, and we took it from there. Together, we wrote the music in just a couple of hours and met the next day to just finalize all the details. That’s how fast it can go sometimes when you get a feeling for something and the snowball just starts rolling, and it’s the greatest feeling in the world! The ‘hit-or-miss’ weekend in this case definitely turned out as a hit!”

Singer Joacim Cans on the duet:
“Already during the writing process I had the feeling this song would be perfect as a duet – a sort of modern ‘Ozzy & Lita Ford’. I have had my eye on Battle Beast and Noora Louhimo for quite some time and was blown away by her vocal skills and stage presence. I had a feeling our voices would be a perfect match. When we decided to make the duet idea reality, I just picked up the phone and called Noora who instantly said ‘Hell Yeah!’ Working with Noora was nothing but awesome and we bonded the second we met. Not only is she an extremely talented vocalist, she is also a fantastic human being. The great connection between Noora and I really shows in the video clip for the song.”

Noora Louhimo on the duet and the video shooting:
“I was contacted by Joacim and asked if I wanted to do a duet with him on “Second to One”. My first thought was ‘what an honor’ and that I needed to listen to this song to make my final decision. Once I heard it, I knew it was going to be something special and agreed on the collaboration. I flew to Gothenburg for the sessions and even though I hadn’t met Joacim or the others from Hammerfall before, it felt very natural and easy to work with them. I also agree with Joacim that we hit it off right away and you can see that in the music video how comfortable things were between us. I am so excited to be part of this and to go on tour with them with Battle Beast in the end of January.”

The marvelous audiovisual was directed by Patric Ullaeus, who has worked as a director for almost thirty years and has collaborated with numerous bands like In Flames, Europe and Within Temptation over the years.