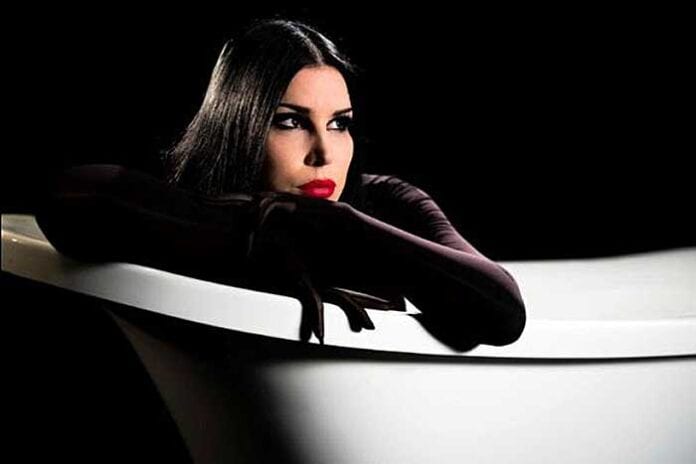 When people talk about synthwave artists GUNSHIP, it’s not uncommon to hear what some might think is hyperbole. But for the men behind the curtain—Dan Haigh, Alex Westaway and Alex Gingell—these plaudits don’t allow them to rest on their laurels… they just make them work harder.

Taken from their second full-length Dark All Day, GUNSHIP’s latest single, “Black Blood Red Kiss” takes the band into a seductive and sensual dreamlike realm, exploring the intriguing relationship between pain and pleasure. The song features musician, tattoo artist and entrepreneur KAT VON D who brings a warm and atmospheric vocal performance to the chorus as well as a hair-raising build up on the song’s central breakdown. Coupled with GUNSHIP’s cold, ethereal synthesizers and Alex’s intimate vocals on the verses, this dynamic combination creates a steady mood that is inevitably corrupted by industrial timbres, building pressure until the song breaks into its warm symphonic chorus. The song reaches its end with a pair of emotional and ominous vocal builds which, in turn, culminate in a pile driver heavy conclusion.

“I’ve always been a fan of dark wave and synth heavy bands like Depeche Mode, The Cure and IAMX, so when I heard Gunship for the first time, it was all the things I loved rolled into one band,” says Kat. “Gunship is by far my favorite synth wave band because they always marry nostalgic synth sounds with dark and melancholy lyrics that strikes me at my core. I think it’s safe to say that I’m probably the biggest Gunship fan out there, so when they asked me to sing on “Black Blood Red Kiss” I was half excited and half intimidated! But once I heard the demo, it felt like a perfect match made in heaven… or hell.”