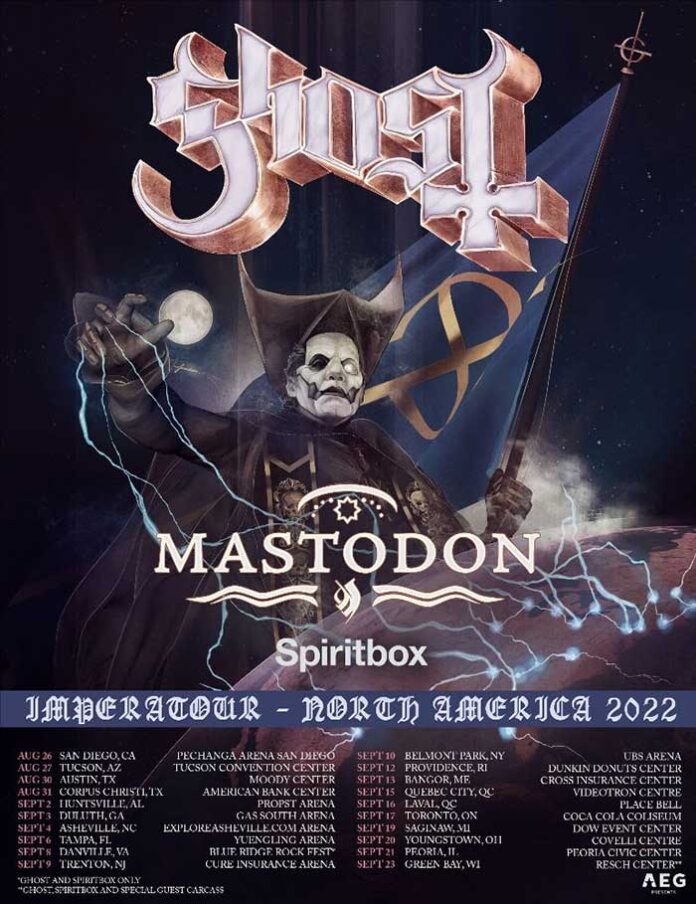 Children of North America, rejoice… GHOST will once again bring the “euphoric spectacle” (ROLLING STONE) of its live ritual to North America for the next leg of its globally dominating IMPERATOUR. The North American IMPERATOUR will see the GRAMMY® Award-winning Swedish theatrical rock band headlining 19 arenas across the U.S. and Canada (plus an appearance at Virginia’s Blue Ridge Rock Fest), kicking off August 26 at San Diego’s Pechanga Arena and running through September 23 at the Resch Center in Green Bay. The newly announced dates will comprise Ghost’s first North American run since the March 11, 2022 release of its fifth album IMPERA via Loma Vista Recordings.

The announcement of IMPERATOUR’s North American swing completes a perfect storm of Ghost mania, coinciding with this week’s ascension of “Call Me Little Sunshine” to the top of the Rock Radio chart and the unveiling of Chapter 11: Family Dinner, the newest installment of Ghost’s long-running narrative series of webisodes. In this next chapter, we find Papa Emeritus IV, having returned to the Ministry, joining Sister Imperator, Mr. Saltarian, and the spirit of Papa Nihil for a meal of Chinese takeout.

Support on all dates (with the exception of Green Bay which will feature support from Carcass, and the Blue Ridge Rock Fest) will come from GRAMMY® Award-winning band Mastodon, who have quietly evolved into one of the most influential, inimitable, and iconic rock bands of the modern era.

Tickets for Ghost’s North American IMPERATOUR will be on sale from May 20 at 10am local time at https://found.ee/Ghost_Tour. American Express® Card Members can purchase tickets in select markets before the general public beginning Wednesday, May 18 at 12pm local time through Thursday, May 19 at 10pm local time.

See below for a complete list of dates. For more information, including details re: limited VIP packages, go to www.ghost-official.com