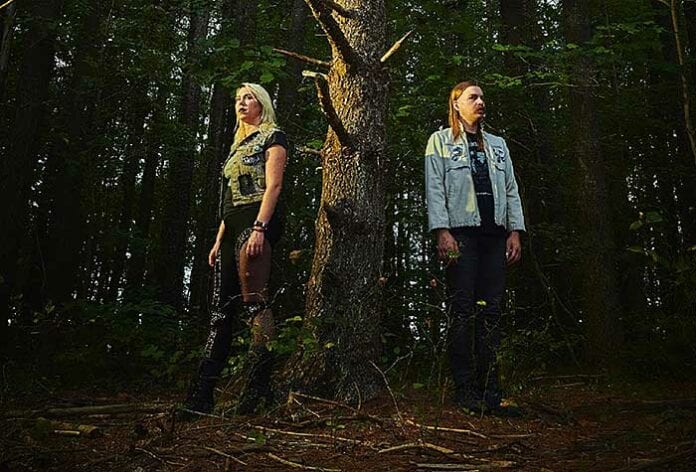 Following the release of Metamorphism—the third LP by Baltimore’s synthpunk/doomwave duo CURSE—via Fake Crab Records in late October, a new video for the album’s “Cassini” has been issued. The premiere takes place as CURSE continues their massive tour in support of the album, now in its final two weeks.

The appropriately psychedelic video for “Cassini” was filmed by KC Oden and edited by Johnny Rogers. With its public premiere, Post-Punk writes how the video, “depicts an outer-worldy space exploration of unknown territory,” calling the Metamorphism album itself, “a cataclysm of different genres of music, from melodic synth to noise-infused grindcore. Reaching from such influences allow the duo of Jane Vincent and Logan Terkelsen to create a lush, grandiose album that is unlike much else.”

CURSE maintains performing on their extensive two-month-long tour across North America in support of the Metamorphism LP. Following shows with Pinkish Black, Wolf Eyes, and more in recent days, the band will continue through the Gulf and Southeastern states and up the East Coast, closing the tour on November 20th in Washington, DC. CURSE has also locked an official hometown release show for Metamorphism on Saturday, November 30th with Darsombra and others.