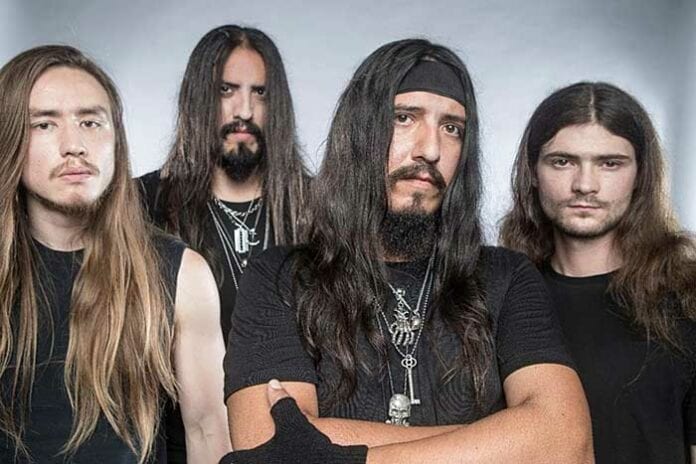 Los Angeles based metal band Art Of Shock announce signing to Century Media Records. To celebrate, the band has just released its new track “I Cast A Shadow” off the forthcoming album Dark Angeles. Listen to the first song off of the new LP.

“This song is about being punished for being yourself,” states Art Of Shock frontman Art Geezar. ”It applies to the whole spectrum of the human experience. From every political or religious exercise to every social crusade. You’re a traitor in every movement if you dare to question it in the slightest. It is about not complying with what other people want you to say, do or think and is about being attacked and burnt on the stake for it. Simple ideas can become tyranny if there’s no one there to question them. We are the traitors. We are the curse. There’s enough of us to cast a shadow over your world!”

When asked about signing to Century Media Records, Geezar adds, “Century Media is legendary, we grew up listening to their amazing bands and now we’re thrilled to be part of the family. We worked really hard with them as a team to create a kick ass album, produced by our dear friend Mark Lewis. It’s just the first one of many more to come! We can’t wait to go out there and show it to the world! So it begins!”

“I Cast A Shadow” is the debut single off Art Of Shock’s upcoming full-length, Dark Angeles. The album was produced and mixed by Mark Lewis (Megadeath, Cannibal Corpse, The Black Dahlia Murder) and is set for release early 2020.

Art Of Shock’s Century Media debut, Dark Angeles, churns with that intensity of the city of (fallen) angels. AOS’ hard-luck and hard-won story begins with their debut at the Whisky A-Go-Go. Without having a full band or equipment, they book a show, with less than two weeks to pull it off. But pull it off ,they did! The stint landed the band a slew of shows throughout SoCal and a ravenous fan base in the LA metal scene. Art Of Shock’s sheer determination then found the band securing a spot on the Vans Warped Tour. Over the years the band have shared the stage with the likes of Trivium, The Cavalera Conspiracy, Sacred Reich, and more. With Dark Angeles set for release early next year, the band is ready to show the world what they’re made of.