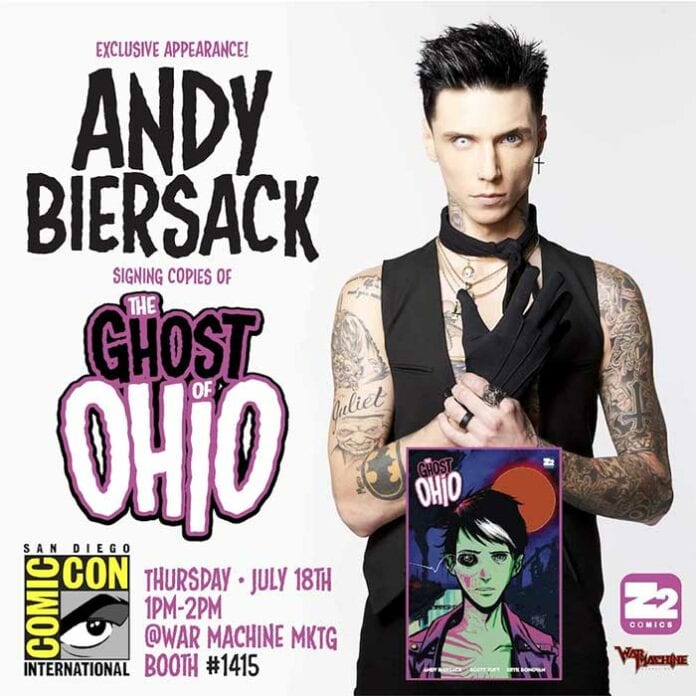 With the acclaimed release of his debut comic book The Ghost Of Ohio in partnership with Z2 Comics, Andy Biersack (Black Veil Brides, Andy Black) will be making an exclusive appearance at San Diego Comic Con on July 18th. The appearance will mark Biersack’s first time at the popular convention. Biersack will be appearing at the War Machine Marketing booth (#1415) at 1:00PM where he will be signing copies of The Ghost Of Ohio.

The Ghost Of Ohio is a graphic novel based on an original story idea created by Biersack alongside the creative team of Z2 Comics: Josh Frankel and Sridhar Reddy. Scott Tuft, known for his work on the Severed and Swamp Thing titles, is writing the comic with Biersack. Artist Eryk Donovan, best known for his Batman creations, created the cover. The comic has been well received by audiences and is currently rated a 4.5 on GoodReads.com putting it higher than the likes of The Catcher in the Rye, The Hunger Games and The Umbrella Academy. The release of the graphic novel was done in conjunction with the sophomore release from Biersack’s Andy Black persona via Lava/Republic Records. Biersack is also known for his work outside of music through his performance in the film American Satan and as the host of The Orange And Andy Black show on WEBN every Sunday during the NFL football season, a show dedicated to his beloved Cincinnati Bengals and rock music.