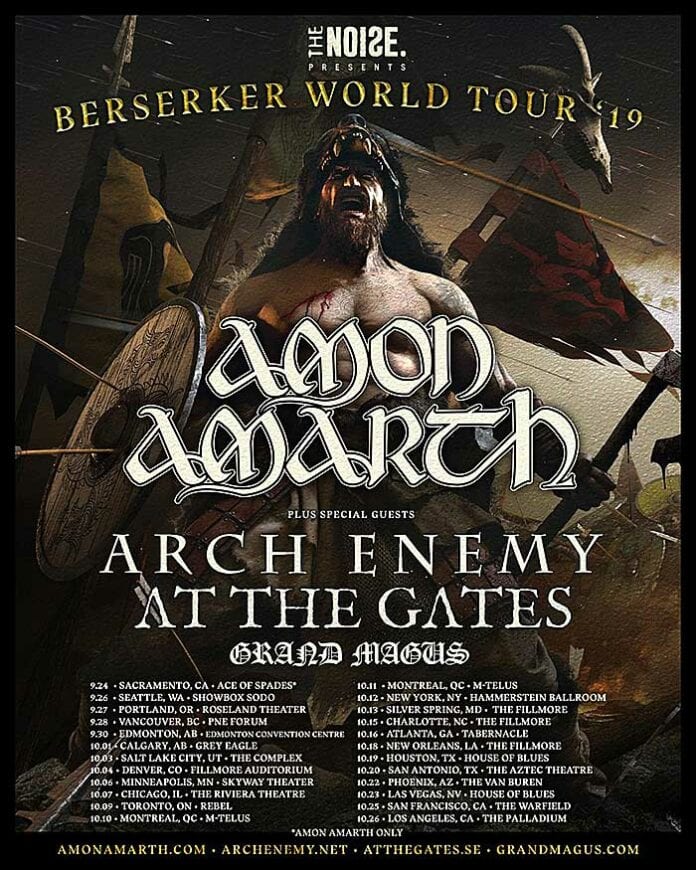 Heavy metal overlords Amon Amarth have released a brand new video for their stomping, anthemic call to arms “Shield Wall.” The rabble rousing new video chronicles the plight of an enemy ship come to invade a viking village. But, as Johan Hegg’s gutteral growl chants “Vikings, Raise The Shield Wall, Hold the Front Line, Fight Till Death,” the fate of the enemy becomes uncertain. Who will emerge victorious from battle? Watch the video below to find out.

Directed by Phil Wallis and produced by Alexander Milas/Twin V Ltd—the same team behind Amon Amarth’s 2018 feature-length documentary The Pursuit of Vikings—the aim of “Shield Wall” was to produce a historically accurate portrayal of the battlefield tactics that Vikings were known and also notorious for. Working closely with noted Viking scholar and battle reenactor Igor Górewicz of the Triglav and Jomsborg vikings, the video was shot on location in Wolin, Poland—site of the world-renowned annual Festival of Slavs and Vikings—and featured extras from the worlds’ foremost Viking reenactment groups, including Triglav, Maximas von Bracey’s Ulflag and Germany’s Blóðvítnir, longtime friends of Amon Amarth whose longtime member Sana portrays the story’s raiding party commander.

As well as felling enemies with their impenetrable wall of shields, Amon Amarth have descended from the land of ice and snow to headline a history-making charge across North America with fellow Swedish warlords Arch Enemy, At The Gates and Grand Magus. Carnage is on the menu as the tour continues across North America.

The Berserker World Tour will be a showcase of the riffing havoc captured on their 11th studio album, Berserker, and will treat fans to the kind of pulverising riffage and sublime, fist-in-the-air anthems the band have come to be known for, because no words are more synonymous with Amon Amarth than unrivaled songcraft and unswerving commitment to no-bullshit heavy fucking metal—and now they have a landmark tour to match.

Speaking on this most epic of tours, Amon Amarth say, “Berserkers! We will lead a Swedish metal invasion of North America this September and October along with our friends Arch Enemy, At The Gates and Grand Magus. Come fight and feast with us and earn your seat in the great golden hall. This raid is pure heavy fucking metal and not to be missed!”

Michael Amott of Arch Enemy adds, “Arch Enemy is very much looking forward to invading North America together with Swedish Viking kings Amon Amarth and our Metal brothers in At The Gates and Grand Magus! Miss this Swedish Heavy Metal apocalypse at your own peril!”

Finally, JB of Grand Magus enthuses,“I would say that epic is the most fitting word to describe this happening. It’s an honour to be part of this gathering of metal giants and we will do our damnedest to make it a memory for life for all who will bang their heads with us during this adventure!”