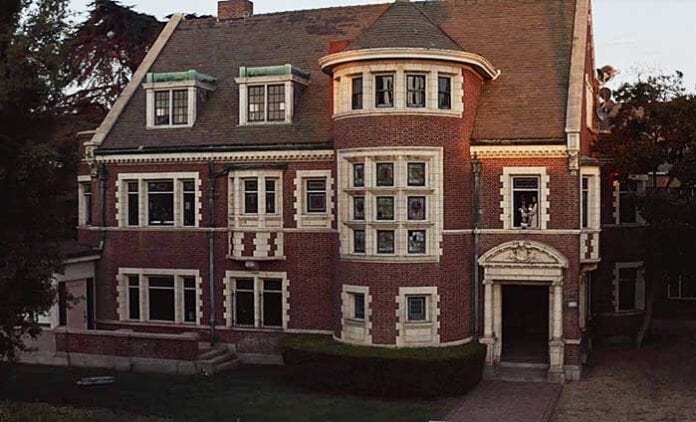 Fans who are familiar with The Infamous American Horror Story Murder House will have the chance to be spooked this Halloween weekend via the first-ever live stream event from the notorious historical Los Angeles monument.

This Halloween weekend, homeowners Dr Ernst von Schwarz and his wife Angela Oakenfold will open the doors to The Infamous American Horror Story Murder House for a three-day, 24-hour live event, which will kick off at dusk Thursday, October 29 before closing out at sunset Sunday November 1. Ticketing info is below. Fans who buy tickets in the first week will get the chance to be chosen to physically spend the night in the basement; join the paranormal team on their exploration; or participate via Zoom to share their paranormal experiences and Halloween celebrations during the live stream. Special limited-edition t-shirts will be screen-printed by hand in the basement and hung there to dry during the event. Shirts can be purchased via the website and are available to ticketholders and non-ticketholders.

For the livestream event, The Murder House will reveal its ominous past via 15 cameras set up throughout the 10,000-square foot home streaming live throughout the entire weekend. Beyond the live stream, viewers will see daily programming with guest speakers joining the family and hosts remotely to discuss everything from exorcisms to near-death experiences, to how to protect oneself from demonic entities.

While the live stream is open to all via the ticketed event, The Murder House will open its doors to a few lucky ticket holders. Six fortunate (or unfortunate)–two per each of the three nights–Murder House fans in the terrifying basement all while being live streamed to the world (while a doctor monitors their vital signs and psychological condition). A few lucky fans will be chosen to be a guest during the first-ever seance or join a small group of ghost hunters in the house during the first-ever paranormal investigation. Enthusiastic fans can apply to be one of the few invited into the house for the weekend’s events by tagging The Murder House on social media. The long-standing myth that the mansion is haunted has finally been confirmed by the current owners (Dr Ernst von Schwarz and Angela Oakenfold, pictured below) who say paranormal activity at the house is a day-to-day occurrence. In a sinister case of life imitating art, the family packed their bags and fled when they uncovered evidence of their home’s ghostly activity dating back to the 1930’s when the mansion was a convent for an order of Catholic nuns.

Dr Ernst von Schwarz and Angela Oakenfold said they realized something was amiss before they even moved in. They received an email from the former owners handyman saying, “I will be out before May 1 and nothing will be left in the house except the ghosts.” Brushing it off, his words came back to haunt them on their very first night when they were awoken by a huge bang and dragging sound. Terrified after hearing it a third time, they called police only to be told–after hours of searching–that it was probably a ghost. It would not be the last time the Los Angeles Police Department would tell them that, even documenting it in official records as “ghost activity.”

Tickets go on sale for $25 on Tuesday, October 20 at www.themurderhouse.com. A portion of proceeds from the event will be donated to the Baby2Baby charity.