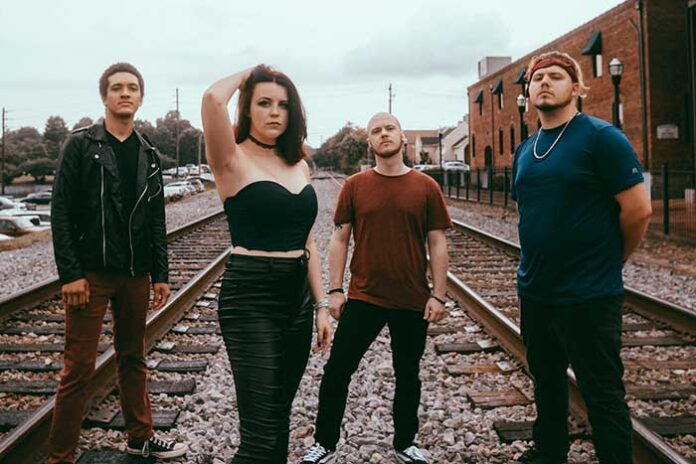 “Piece by Piece” is very much a self discovery song for me, struggling with who I am and where I’m supposed to be going as an individual. Realizing you have to stand up and take control of your own life and that life is 100% what you make of it. The eerie, dark feeling of the song really settles into the idea of not knowing where you’re going, and the scary journey and realization that you don’t know who you are and you have to do everything you can to find yourself.

“It’s Goin’ Down” is our take on a party song. You have the innocent idea of going out to a party to have fun with your friends, but the undertones in the lyrics, especially as the song progresses, dips into the reality of what can happen in situations like this. There are a lot of dangers with binge drinking, drugs, and the scene in general, especially from the perspective of a woman. There is absolutely nothing wrong with wanting to have a good time, but we try to shed some light on the dark side of what sometimes happens.

I find “The Bargain” to be our big number, almost as if it’s a big finale. But on the contrary, once the last portion of the song begins, you realize it’s only the beginning. The idea behind this song was the journey through the five stages of grief: Denial, anger, bargaining, depression, and acceptance. I don’t want to speak for all of the members of Misty Eyed, but I feel as though this is the most important song to us as a group. There’s so much emotion and turmoil behind this track that it’s hard to not relate in some form or fashion.

“This Was Not a Suicide”

This song is almost my baby. “This Was Not a Suicide” was written to elaborate on some of the darkest moments I’ve felt. It’s the internal struggle I’ve felt for most of my life—metaphorically killing who I used to be and attempting to reinvent the way my brain perceives myself. As of now, this is the closest Misty Eyed has to a ballad. This is our “Every Rose Has Its Thorn.” It’s a very different song than anything else we have.

We’re all extremely proud of “SOS.” For those who don’t know, it’s a reimagined version of our song “Sense of Soy.” [Megan] personally love this song because it’s such a great way for me to see just how far we’ve come. I listen to the original track and then play this one, and the difference is astounding. It really set the stage for our overall theme of self struggles, and I feel like it’s only grown more powerful with time, much like us as a band.

Up until the full release of our new EP, “Run” is the most personal song to date. It’s a much more literal lyrical journey of what I have gone through to lead me on my journey of self-discovery, which I think is a journey everyone goes through at some point in their life. It makes this a very surreal song to perform live, because I can feel the connection with the members of the audience who have heard this song and understand its meaning. It sounds cliché, but I think clichés are cliché for a reason, not letting people tell you who to be and breathing that breath of fresh air for the first time is liberating.

Drawing on influence from the likes of Lzzy Hale and Five Finger Death Punch to legends such as Ozzy Osbourne and Metallica, Misty Eyed draws on a dexterous and cultured array of influences, honing them impressively. Having signed to 59 X Records, Samsara presents a fusion of vibrant, upbeat alternative rock, and resonating metalcore; urgent interplaying deftly with melodic, as Misty Eyed continues to dazzle on the new collection.