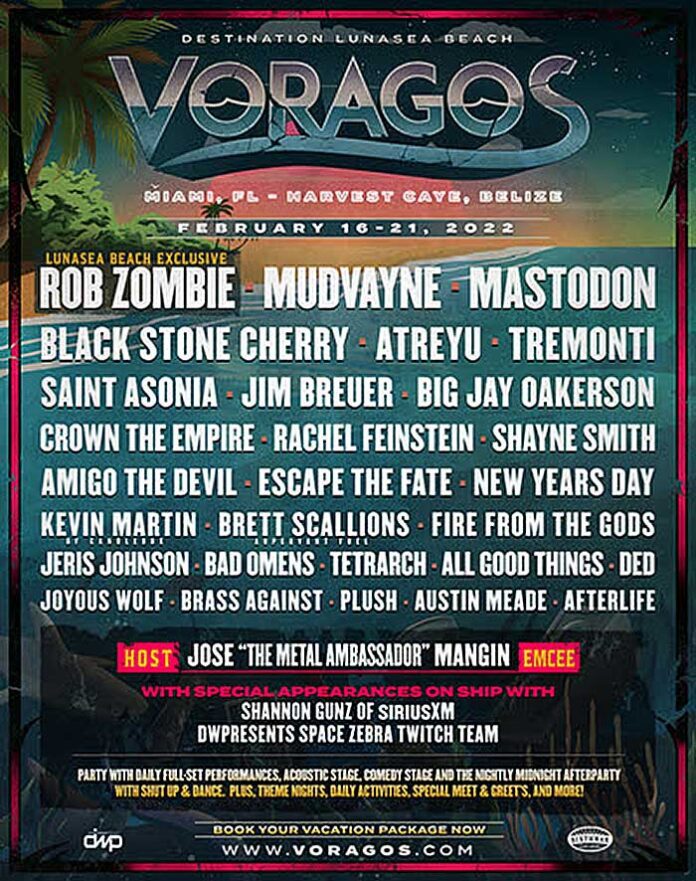 “That Space Zebra Show” To Launch “Battle For The Big Seas”
On DWPresents Twitch Channel This Fall, Giving One Unsigned Band
The Chance To Perform On VORAGOS

Cabins Are On Sale Now At www.Voragos.com

VORAGOS: Destination Lunasea Beach has announced several exciting additions to the lineup for the private island festival and 5-day rock cruise coming in early 2022. The list of newly added acts includes the recently reunited Mudvayne (who continues to partner with Danny Wimmer Presents for their first live performances after a 12-year hiatus), Atreyu, Crown The Empire and Afterlife.

Mudvayne will play both on board and at Lunasea Beach and will replace Chevelle who regrettably have to cancel their VORAGOS Lunasea Beach appearance due to a conflict with their upcoming touring schedule. All other previously announced acts will be appearing, including Rob Zombie, Mastodon and more.

“I still can’t believe I’m saying…MUDVAYNE IS BACK,” says Chad Gray of Mudvayne. “It’s been a long time coming. We are very excited to get back on stage in front of all the OG Oxygen Wasters and the New Ones that have NEVER seen us! We’re looking forward to being on the maiden voyage of DWP’s VORAGOS cruise. Let’s Go!”

The anticipated rock festival vacation experience – which takes place February 16-21, 2022 aboard the amenity-packed Norwegian Pearl Ship and will be docking for one day in Belize for a one-of-a-kind private island beach festival – now has an official host with SiriusXM’s Jose “Metal Ambassador” Mangin coming on board to emcee the event and host various activities with fans and bands.

“I’m far beyond stoked to be hanging and partying with so many friends and family on VORAGOS, and getting to host it is even better,” comments Jose Mangin. “This destination cruise is going to be one for the record books for sure! A festival on the beach, and concerts on board, it’s so badass! I can’t wait to throw down hard with you and my Metal shipmates in Mudvayne, Mastodon, Atreyu, my AZ homies DED, Rob Zombie and so many others!”

KILLSWITCH ENGAGE Announces Live at the Palladium and Shares “Know Your...