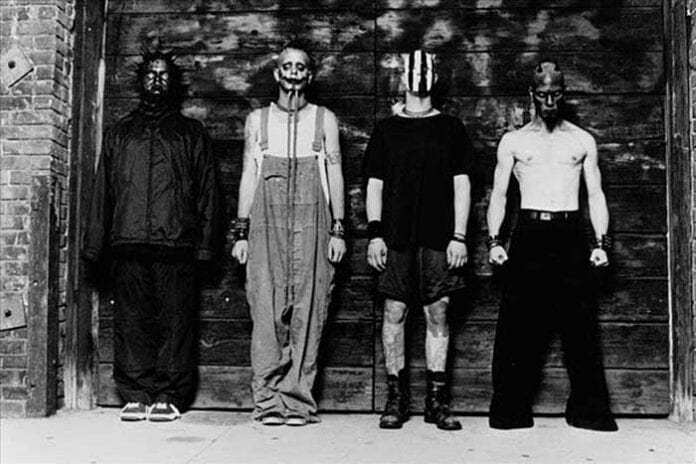 Mudvayne—one of the most creative and distinctive bands in the aggressive music world—has announced that they’re reuniting after a 12-year hiatus, and will be performing at all four Danny Wimmer Presents U.S. festivals in 2021: Inkcarceration Music & Tattoo Festival (a headlining performance) in Ohio, Louder Than Life in Kentucky, Aftershock in California, and Welcome To Rockville in Florida. These dates mark the band’s first shows since 2009 and their only dates this year.

Danny Wimmer, founder of Danny Wimmer Presents recalls, “In our fan surveys, Mudvayne has consistently been one of the most requested bands—even though they weren’t an active band! We’ve been working for years to make this happen, so when I got the call that they’d finally take a meeting, [DWP Executive VP & Talent Buyer] Gary Spivack and I jumped at the chance to fly to Vegas. We sat down for dinner with Mudvayne, their lawyer Eric German, manager Diony Sepulveda and agent Ryan Harlacher—the band hadn’t even been in the same room together for 10 years—and pleaded our case for why the time was right for this to happen. We were hoping to announce this in 2020, we’re fortunate enough to be able to do it in 2021, and DWP is super pumped to have Mudvayne exclusively at all four of our festivals this year.”

The full list of Mudvayne performances at 2021 DWP festivals is as follows. Specific show dates and performance times will be announced later.

– Aftershock – revealed as the “mystery reunion band,” performing on Saturday, October 8 at Discovery Park in Sacramento, California. Weekend passes are sold out, but a very limited number of single day passes are still available.