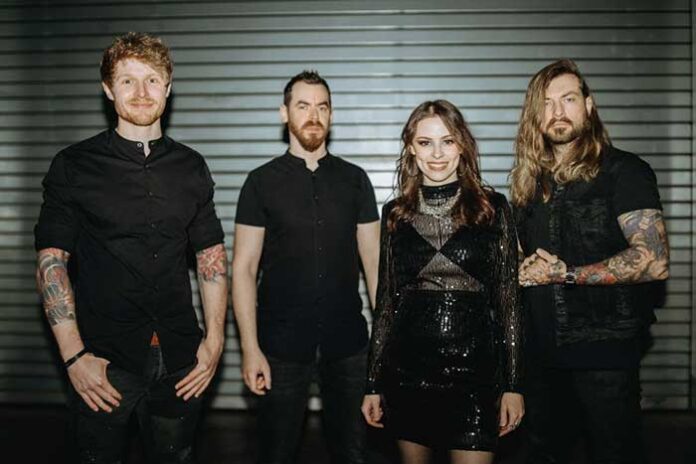 One of the brightest stars in the symphonic metal universe has found a new home: NUCLEAR BLAST RECORDS is incredibly proud to welcome BEYOND THE BLACK to the ranks of the worldwide NB family.

The band states: “After an exciting and successful time with our former record label, we are ready to open a new chapter of BEYOND THE BLACK today. As a band, we stand together as strong as never before and in NUCLEAR BLAST we have found a powerful label partner with a great team who are going to join forces with us to bring BEYOND THE BLACK to a new level. Also, deciding for the world’s biggest Metal label feels somewhat like coming home!”

With their astronomical rise after the release of their debut album Songs Of Love And Death, the band around singer Jennifer Haben went supersonic, most recently reaching a number of impressive chart positions with fourth LP Horizons.

Marcus Hammer, Managing Director of NUCLEAR BLAST GMBH, states: “We’re thrilled to welcome BEYOND THE BLACK as a new member of the NUCLEAR BLAST family. We’re talking about an exceptional artist with talent and passion that raises huge hopes into their meteoric rise only being the start of something bigger. We couldn’t be any happier to be an important partner for BEYOND THE BLACK from now on and support the band on their future path – we’re looking forward to a fantastic time and a promising future for both partners!”

Jens Prueter, Head of A&R Nuclear Blast Europe adds: “We are very proud to welcome BEYOND THE BLACK to NUCLEAR BLAST RECORDS. It’s amazing what they achieved so far: top 5 entries in the German charts, TV appearances, sold-out shows, and regular guests at the biggest festivals. A success that also caused envy but not everyone is as talented as Jennifer Haben and her band, and not everyone has such a spirit of hard work. It’s a pleasure to follow their strong vision and it’s a great addition to the NUCLEAR BLAST artist roster where they will be in good company with NIGHTWISH, EPICA, AMARANTHE, or BATTLE BEAST. Special thanks to their manager Benjamin Küfner for making this happen. Let’s explore new horizons!”